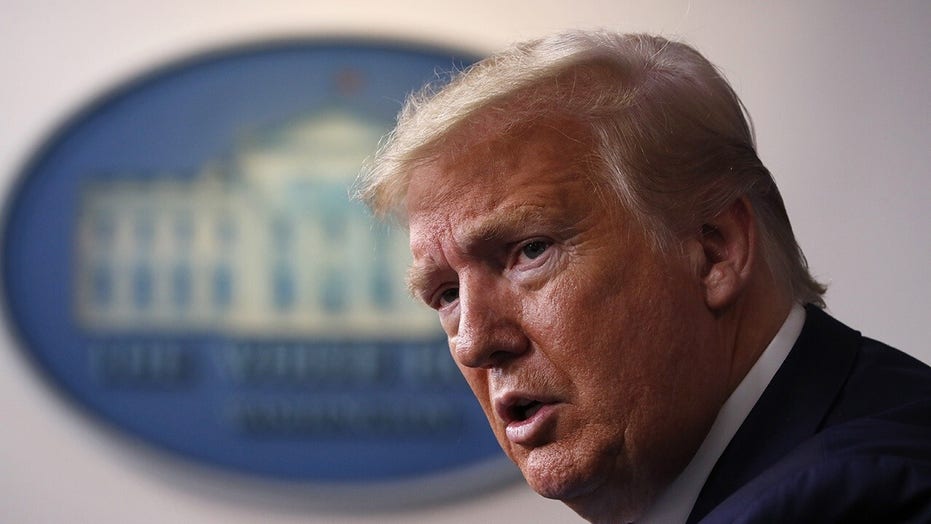 EXCLUSIVE: The Trump campaign has sent a “cease & desist” letter to a group called Black Americans to Re-Elect the President, while filing a notice with the Federal Election Commission alleging the PAC is conducting misleading fundraising efforts that appear to wrongly portray itself as Trump-affiliated.

In a disavowal notice to the FEC, obtained exclusively by Fox News, the Trump campaign complained that the organization appeared to be using President Trump’s “name, image, likeness, or slogans in connection with soliciting contributions and conducting other activities.”

“This Committee is concerned about the likelihood of confusion among the public, which may be led to believe such activities are authorized by Mr. Trump or this Committee or that contributions to such unauthorized committees are being made to Mr. Trump’s campaign, when they are not,” the Trump campaign wrote to the FEC, noting that they wish “to place this disavowal notice on the public record” that the organization “is not authorized by Mr. Trump.”

“That is false, and, as COO of the Donald J. Trump for President, Inc., I write to demand that you stop immediately,” Glassner wrote.

Glassner went on to notify Vernon of the campaign’s disavowal of the PAC and demanded that it “cease and desist activities suggesting that you are fundraising [on] behalf of the President or his Campaign.”

“Your PAC’s name coupled with its use of President Trump’s name, image, and likeness in solicitations has likely confused donors into believing that by giving to your PAC, they are contributing to or supporting President Trump, or that your PACs’ efforts have been authorized by the campaign,” Glassner wrote. “To be clear, they have not.”

The PAC’s website, blackamericansmaga.org, features a banner image of the president shaking supporters’ hands, as well as several other images showing the president and touting his administration’s African American unemployment numbers.

The website states that the group is a PAC “dedicated to re-electing the President by promoting the policy initiatives of President Trump,” including cutting taxes and job creation, “expanding educational opportunity, securing the border and stopping illegal immigration, saving black babies from abortion and promising crisis pregnancy centers,” and more.

The group does, however, acknowledge at the bottom of the page that the website is “Paid for Black Americans to Re-elect the President. Not Authorized by any candidate or candidates’ committee.”

In a statement, the PAC defended its work, saying “Black Americans to Re-Elect the President has absolutely supported both the Re-Election the President and the President’s Agenda for over three years.”

“Scam PACs keep the money, don’t do any of the above things and do not have this caliber of public servants leading their PACs,” the statement read. “We have never claimed to be part of the Trump campaign and our booklet Keep Black America Great, our radio ads and our website include the disclaimer Paid for by Black Americans to Re-elect the President: Not authorized by any candidate or candidates’ committee.”

The PAC added: “We believe that when we sit down with the Trump Campaign Counsel, we will work out this misunderstanding consistent with prohibition on coordination between an independent committee and an authorized one.”

On the website’s donation page, the PAC notes that they are looking to communicate with black voters who “self identify as conservative” and who “approve of the President’s achievements and mobilize them to widen the Republican Majority in the Senate, win the special election in NC-09, re-take the House and to Re-Elect the President in 2020.”

Glassner warned the group of the Justice Department’s “recent focus on federal prosecutions of individuals associated with groups that intentionally mislead donors and extract money by deceptively promising to spend it on political campaigns.”

Glassner also cited two cases in 2019, where two PAC operators received jail sentences for fraudulent activity: “We thought you should be aware of these developments—which, in the words of the U.S. Attorney for the Southern District of New York, are ‘a clear warning to anyone engaged in fraudulent political fundraising: Scam PACs are a crime and those perpetrating them will go to prison.’”

Glassner added: “The Campaign wants to make this absolutely clear to you: If you do not change your PAC’s name to not reference President Donald Trump in any manner and do not stop your misleading fundraising, the campaign will consider all options available to it to protect itself and its supporters, including pursuing civil remedies under federal and state law, as well as notifying law enforcement of its concerns.”

Glassner gave Vernon a deadline of April 15 to confirm in writing that the organization intends to comply with the campaign’s demands.

The PAC, however, explained that they “have bought booths at GOP and Conservative meetings in Florida, Georgia, Pennsylvania, Michigan, Iowa, Arizona, North Carolina, Virginia, the Southern Republican Leadership Conference in Louisiana  and Western Conservative Summit in Colorado to convince party leaders and conservative activists to change course and actively pursue support of black voters for the President’s re-election and his agenda.”

The PAC claims to have mailed “over a million booklets and shipped another 100,000 plus booklets to activists refuting the ridiculous charge that the President became a racist at 70 after being feted by the civil rights establishment for his entire adult life, exposing racist comments of Joe Biden and other Democrats and finally, touting the President’s agenda on Life, school choice and educational opportunity, jobs and wealth creation, the 2nd Amendment, securing the border, and criminal justice reform.” The group says it also bought radio time in 16 markets across six states “to help elect federal candidates and re-elect incumbents who support the President.”